This is the somewhat technical post to go along with my recent video on miracles and mutual support. It's been fun for me to revisit these topics mentally in the last week or so as I've been planning the video. Since 2008 when Tim and I published our mutual support paper in Erkenntnis, I've published individually a lot more work on independence and testimony. I'm going to include below a list of some relevant publications, some of them (alas) probably available only through institutional subscriptions. But some of them may be available to independent scholars through a free JSTOR account, so do give that a try.

First, here is the diagram that I used in the talk. (Hat tip to Esteemed Husband for making it look nice.) 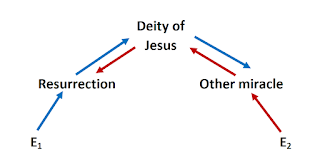 As I emphasized in the video, no line of support contains a loop. The discussion is necessarily simplified, especially as regards the role of background evidence concerning the reliability of a source (such as a single Gospel) that reports both the resurrection and the other miracle. Let me say a little more about that.

First, whether you have evidence that two reports are true or false, if they truly support one another in some way, this is always one-directional, even if you think that the people involved are lying or mistaken. The possibility of fabricated reports doesn't in any way mean that you have a loop. Let me make this concrete: Suppose that Joe tells you two different stories. In both of these stories, Joe is set upon by an enemy or by enemies who try to beat him up, and he wins the fist fight. You may suspect that Joe is lying in both cases. This would mean that you think he is a braggart who is trying to make himself look tough. Even so, there would be no loops of support. Call one story Report A and the other Report B. Call their contents Fight A and Fight B. Suppose that you, based on your other information about Joe (e.g., that he's a puny little guy) decide that neither Fight A nor Fight B happened. In that case, the reports still support each other, in the sense that receiving Report A gives you some additional reason to expect Report B, since Report A supports the umbrella hypothesis that Joe is a braggart who wants to look tough by telling fight stories. Hence, you have somewhat of an expectation that he will tell another story of the same general kind. By the same token Report B gives you some reason to think you may receive Report A, via the same route in the other direction. (Here it is somewhat helpful to imagine receiving the reports at different times and imagining that you receive them in one order and then imagining that you receive them in the other order, but this is just to help keep things clear.) So the reports are mutually supporting (each raises the probability of the other) via the proposition that Joe is a particular kind of liar, and that mutual support is non-circular.

On the other hand, if you have, or gain, information that leads you to think of Joe as truthful and humble, as a person who tells things that are embarrassing to himself and doesn't make things up, if you learn independently that Joe has studied martial arts, and the like, this will decrease the probability that he is lying. In that case, Report A will have more force for Fight A (that that fight actually occurred). By the same token, you will have support from Report A (given your other background evidence about Joe's truthfulness) for a different umbrella hypothesis concerning character and circumstances--e.g., that Joe has (or tends to attract) enemies who try to beat him up, and that when that happens he is a good fighter. This "truthful" or "positive" unifying hypothesis will give you some additional reason to expect another actual fight in the real world, won by Joe. In this way, Report A supports Fight A; Fight A supports the hypothesis that Joe is a fellow who tends to get into fights and win them, which in turn raises the prior probability of Fight B. That also increases at least somewhat the prior probability that you will receive Report B, since Joe seems to tell you about these things. In turn, if you receive from Joe the input Report B, that provides some evidence via the opposite (non-looped) route that raises the prior probability of Fight A.

This means that in these kinds of scenarios, other background evidence that supports the truthfulness of a source that tells both stories tends to focus the evidential force of each report in such a way as to support the content of the other story. To apply this to a Gospel: The more separate reason we have to believe that John the evangelist is truthful and does not make up stories that promote a theological agenda, the more reason we have to believe (all else being equal) that his story about the healing of the man born blind is true. That, in turn, helps to support the hypothesis that there is something very special about Jesus (that he is at least a prophet, if not God himself), which increases at least somewhat the prior probability of the resurrection. And vice versa. The reports can be thought of as inputs. (Technically, as a strong foundationalist, I'm going to take the inputs at any given time to be things like your apparent memories at time t of reading the reports at time t - 1 and so forth--things to which you have direct access.) The force of each input in favor both of its own content and of the content reported by the other input is increased by other evidence that supports the truthfulness of a source that contains both reports.

On the other hand, if we were to have independent evidence that John the evangelist makes up marvellous stories about Jesus, the story about the man born blind would have little force to support the resurrection of Jesus, not only because it would probably be false (would have little force for its own content), but also because it wouldn't support a positive "unifying hypothesis" (such as Jesus' deity or the idea that there is something special and supernatural about Jesus) that would in turn increase the probability that Jesus would really rise from the dead. A negative "unifying hypothesis" (that John makes up theological stories) could still unify the reports--the report of the man born blind in John might give us some additional reason to think that John would also report the resurrection--but not by way of allowing each report to support the truth of its own content and thereby to support the other event.

To put it briefly, as we come to have more and more justified confidence that this person/author doesn’t make stuff up, we get closer and closer to an uncomplicated situation in which we can reasonably say, “Well, since that event happened, that makes it more likely that this other event happened, too.”

Another point: While the testimony of an otherwise highly reliable source is itself good evidence that the next thing he tells us is true, it is of course especially helpful if the story in question contains specific marks of realism. That makes the report even stronger evidence for what it attests, and this comes on a quasi-continuum. We should not be agnostic about each report on a passage-by-passage basis. That is something I have always spoken out against and will have much more to say about in The Eye of the Beholder. On the other hand, a brief, undetailed report will in the nature of the case carry less weight that a longer report in which we can point to specific marks of truth. In the accompanying video I draw a contrast in this regard between the account in John 9 of the healing of the man born blind and Mark's account of Jesus' healing of a blind man in Mark 8:22-26. Even the latter is not a bare statement, "Jesus healed a blind man near Bethsaida" and nothing more. It contains the oddity of Jesus spitting on the man's eyes (similar to his creating a paste from saliva and mud in John 9). It contains the bit of dialogue in which the man says he sees people walking like trees and Jesus touches his eyes again, which could potentially be embarrassing to a person wanting to make Jesus look more powerful. (Yes, I know that one can make up theological meanings for this, but those are subjective and unconvincing.) And there is Jesus' attempt to get him not to tell others about the miracle, which fits with other cases in the Gospels. So even here there are indicators of truth. An example of an even more spare account would be John 2:23, which just says that Jesus performed "signs," unspecified, when he was in Jerusalem at the Passover. The healing of the man born blind in John 9, being longer and more detailed, provides more opportunity for markers of truth to come up.

The discussion of general reliability above concerns one source that tells both stories. If you have additional evidence from another document, another person, etc., for one or both of the events or for details mentioned in the story, all the better. That, too, would be included in the direct evidence for that story as modeled in the diagram. In the video, I included a bundle of different things in E1. In the case of the resurrection, we have several different Gospel accounts, evidence for the reliability of those other Gospels, as well as other evidence (e.g., in Acts) for the disciples' early attestation of the physical resurrection under conditions of great personal danger. Undesigned coincidences between accounts help to show independence as well as truth--a twofer. Apparent contradictions help to show independence.

As I say, it's been a lot of fun to return to this material, and believe it or not, there are still more complexities that I haven't discussed here. I've been making some additional notes in a document of some other thoughts on the probabilistic issues that I'm not including here.

Below is a small bibliography, ordered from most recent on top to oldest on the bottom, of some of my professional publications on these topics, including a more recent individual publication in Erkenntnis on undesigned coincidences. At a minimum, the combination of the video and this post shows that it is possible to "keep accounts" so that we are not using loops of support when there really is mutual support between miracle accounts (or between any accounts). Evidence for Gospel reliability is highly relevant to all of these issues, though "keeping accounts" is somewhat complex.

“Evidential Diversity and the Negation of H: A Probabilistic Account of the Value of Varied Evidence,”  Ergo 3:10 (2016), available here.